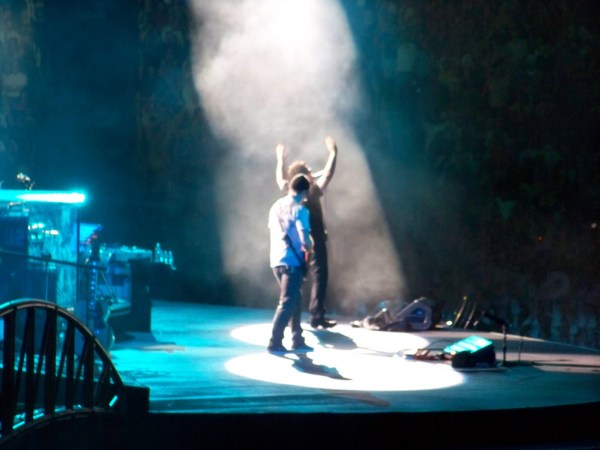 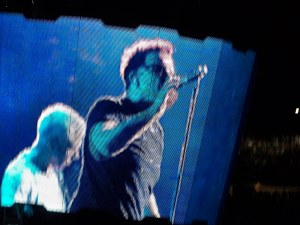 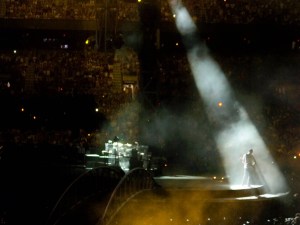 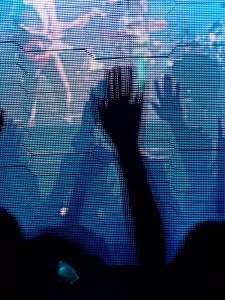 I had a date with Bono at Busch Stadium in St Louis. It was pretty good. More than pretty good. To be honest, if I never get to go to another rock-type concert in my life, I will be happy because it was THAT good. Musically, production quality, technology, depth of meaning — everything was as good as it could be.

My favorite part was the introduction to the song Beautiful Day. They had a webfeed from Mark Kelly, Gabby Gifford’s husband, who was on the Space Shuttle. They asked what he wanted to say. He held up the intro words to the song in front of him and let them float off. (lack of gravity can be a beautiful thing to behold) Then he said, “tell my wife I love her very much . . . she knows” (lyrics from Major Tom).

Here’s the same part from the Anaheim concert.

I talk a lot about music on here. Music expresses thoughts and emotions in a deeper way than words can.

But what song speaks to you? 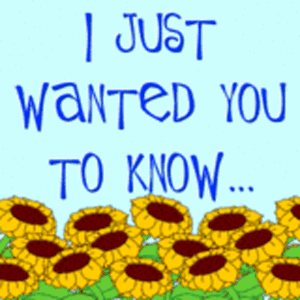 I’ve been trying to do these daily challenges MeYouHealth.com So far, none of them have been huge. Plan ahead for one thing for tomorrow. Clean out your refrigerator (didn’t do that one yet!). Write about someone you admire. They’re just little things that can help you stay focused and productive, but they are things that tend to get lost when life is busy and tiring.

Today was the challenge to write about someone we admire. Is it strange that it took a minute or two to think of someone? I have so many wonderful people in my life, but I tend to think of them as friends, not someone I’ve put up on a pedestal to admire. Then, I realized that my definition of ‘admire’ was off. It’s not about elevating someone or feeling less than them — it’s simply appreciating who they are, what they do, the part they’ve played in your life, and hoping that you can be some of the same to someone else. More of a pay it forward idea.

So I thought about my dad. He’s been one of the most sincere and stable parts of my life. His ability to live by what he knows to be right and true is unlike any I’ve seen in someone else. If he hears that almonds are good for him, he will regularly eat 4 a day. If the doctor tells him to start walking, he just does it. If God says marriage is for better or for worse, then it just is. So yes — I admire his conviction.

I also admire his sense of humor. He’s not stand-up-comedian funny, but he sees humor in every day life and when he starts laughing he absolutely can’t stop. The wonderful thing is that he sees humor in life without being sarcastic or hurtful to others. Lots of people laugh at other people, but I don’t know that I’ve ever seen my dad do this.

Ever.
And no one could ever say that about me. I love life, I laugh at it a lot, but I have to work very hard at not being sarcastic.

My dad is also a very humble man. He has been loyal, faith-filled, and inspiring to many people over the years, but he would never see himself as a great man. He’s a thinker. A teacher. A gardener. A learner. He’s always trying to learn something new and help others do the same.

When I read To Kill a Mockingbird and fell in love with Atticus Finch, a large part of it was because I saw so much of my dad in him. When Miss Maudie said, “Atticus Finch is the same in his house as he is on the public streets,” she was describing my dad too.
I’ve often said that my grandmother was my living, breathing Proverbs 31 woman. My dad is my own personal Atticus Finch. And I can definitely admire that.

What is your favorite thing to do with friends? Grab a meal? Watch a movie? Just hang out?

I love going and doing. I love seeing new places and learning new things. I love meeting new people and hearing their stories.

However, the older I get, the more I find myself seeking time with the people I’ve known the longest — my family, my childhood friends, college friends — the people who know me and can kind of understand why I am the way I am. And when I’m with them, I love nothing more than just hanging out and being together. 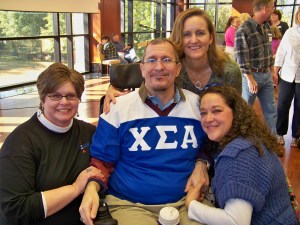 How about you? What’s your favorite way to just be with someone?

How cool would it be to have had THIS as your elementary school music experience?